The MV Agusta F4 was the motorcycle that launched the resurrection of MV Agusta in 1998.

The F4 engine is a liquid cooled inline four cylinder four-stroke with two overhead camshafts (DOHC), 16 radial valves, electronic multipoint injection, induction discharge electronic ignition, with engine displacements of 749.5 cc (45.74 cu in), 998 cc (60.9 cu in), and 1,078 cc (65.8 cu in). The engine was derived from the 1990–1992 Ferrari Formula One engine. Early in the design process Ferrari engineers assisted in the development of the engine. MV (Cagiva at the time) quickly deviated from the Ferrari design, but they kept one important feature, the radial valves. The F4 engine is unique in the sense that it is the only radial valved motorcycle engine currently in production.

The F4 Tamburini, F4 Veltro, and F4 CC models are equipped with variable length intake ducts known as the "TSS" system. The "TSS" system is designed to increase torque in the low to midrange, while still allowing for max. horsepower at the top of the rev range (usually two mutually exclusive properties of an engine). The "TSS" system has two positions, it is not able to vary the height of the intake ducts continuously. "TSS" is able to lower peak torque from the 10000 rpm to 9000 rpm while maintaining maximum power. This system debuted on the F4 Tamburini and was lauded by independent motorcycling publications such as Australian Motorcycle News.

The first F4 model released to the public was the F4 750 Serie Oro on May 1999. Only 300 examples were produced. Many parts such as the swingarm, frame side plates and wheels were made from magnesium. These magnesium parts were anodized gold for consistency with the name 'Oro' (Italian for gold). All painted parts, such as fairings, seat cover, front mud guard and even the fuel tank and air box are made of carbon. It's only by using these materials that the weight could be kept under 400 lb which is only beaten by the F4 Veltro. The specially for MV Agusta developed Showa fork has fast detach axle clamps. The six piston (front) and 4 piston (rear) brake calipers are made by Nissin. 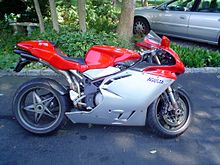 Introduced in 2000, as a 2001 model. Available only in the Neiman Marcus Christmas catalog, "silver book". Virtually identical to the F4 750 S except for a special brass plate with the Neiman Marcus logo stamped on the triple clamp. There were only 10 available through the Christmas Book and with each purchase, Neiman Marcus included VIP tickets to the International Superbike Classic at Laguna Seca Raceway followed by one day of California Superbike School conducted by Keith Code.

The F4 750 SPR was released in 2004 and was intended to be the final evolution on the F4 750 platform. It had an improved 146 hp (109 kW)[citation needed] engine, (13,900 rpm redline, polished ports, HC pistons) matte grey race livery, some carbon fiber bodywork (front fender, chain guards, air ducts covers) and Marzzochi 50 mm forks. The F4 750 SR was released after the SPR, and used the same frame an F4S (Showa forks, no carbon parts) but the same engine of SPR version. Both the SPR and SR were limited production runs of 300 bikes and had a top speed estimated at 180+ mph @ 13,900, and a quarter mile time of 10.4 @ 139 mph.[citation needed] The SR was released in the traditional red/silver livery of MV with a color coordinated red front fender and a bronze Arrow exhaust system. It also has a white gauge face, different from the standard yellow, which displays Agostini's signature in red. It also has the signature silver star rims and SR plate placed on the steering head. 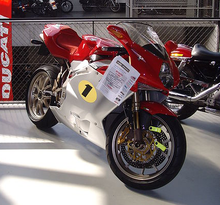 Like the F4 750 and the Oro, the new F4 1000 product line began with a special edition F4 1000 called the F4 AGO in 2005. The F4 AGO came with a special graphics prominently displaying the number "1" in a yellow oval in reference to MV Agusta's racing heritage and rider Giacomo Agostini. Only 300 bikes were produced. 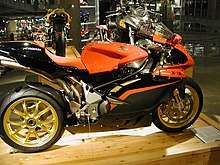 The F4 Tamburini is a special edition of the F4 1000 S released in 2005. It was the first F4 to be equipped with the Torque Shift System (TSS), which varies the length of the intake trumpets with speed in order to provide optimum torque at low and high engine speeds. Engine output was a claimed 128 kilowatts (172 hp) and claimed top speed was 190.6 mph (306.7 km/h).[1] All the bodywork was carbon fiber except the fuel tank. Only 300 were produced. The bike is named after its designer Massimo Tamburini.

The F4 1000 Senna is a special edition of the F4 1000 R released in 2006. It is similar to the 2002 F4 750 Senna in spirit, but has some changes to the paint scheme and an alcantara seat. This model comes with the 174 horsepower (128 kW) engine[citation needed] and has also the upgraded Brembo Goldline radial brakes, forged silver Marchesini wheels, a 50 mm titanium-nitride coated Marzocchi upside down fork and a lightweight Sachs racing rear suspension (in high & low speed range adjustable rebound and compression damping). Only 300 were produced. 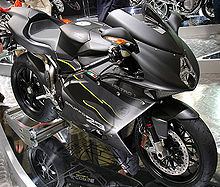 The F4 Veltro comes in two models, the F4 Veltro Strada (road) and F4 Veltro Pista (race). Ninety-nine examples of the Strada were produced, as well as 23 examples of the Pista. As is standard for a race modified motorcycle, the Pista is not equipped with headlights. The Veltro models engines feature the TSS system originally found on the F4 Tamburini. These are considered by many to be the most race-oriented F4's available.

In addition to the parts found on the Veltro Strada, the Veltro Pista is equipped with a lightened frame, oversized radiator, carbon fiber fuel tank, and a magnesium triple clamp and swingarm. 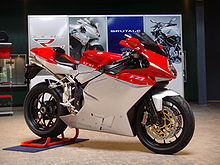 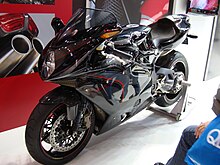 The F4 CC, named after Claudio Castiglioni, the Managing Director of MV Agusta, was released in late 2006. The F4 CC has 163.7 hp (122 kW) @ 12,500 rpm (rear wheel) and has a price tag of $120,000.[8] The engine is a 1,078 cc larger capacity edition with valves, crank and piston rods made from titanium based on the F4 1000 R engine combined with the TSS (Torque Shift System). It is one of the most exclusive motorcycles in the world (100 examples). The F4 CC uses the 1078cc engine, which is a 'long stroke' version of the 312 engine, the extra engine capacity being gained by use of a longer crankshaft stroke. This design change allowed the engine tuning to bring the maximum torque delivered to be at a low 8,200 revs, instead of 10,200, as with earlier engines